On Tuesday, October 8, 2019, Milwaukee’s Archbishop Jerome Listecki honored Dick and Terry Boldin for their work by giving them the Vatican II Award for Service in Communication. The Vatican II awards were established in Milwaukee in 1991 to honor men, women, and young adults who exemplify the Catholic Church’s vision set forth in the Second Vatican Council. 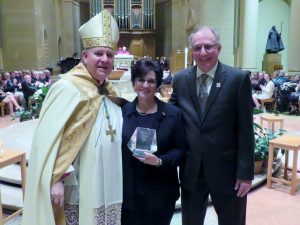 The Boldin’s founded the Rosary Evangelization Apostolate on January 31, 2003, and have been diligently working to help bring peace to the world by fostering the prayers of the rosary and family values. The Apostolate is based in Milwaukee, WI and organizes special events, conferences, and initiatives in Milwaukee and throughout Wisconsin and beyond.

Dick and Terry had the inspiration for a feature-length film with a modern, yet truthful message that would transmit the hope, mercy, compassion, and love that comes through praying the rosary. After two and a half years of production, Power In My Hands premiered in Milwaukee in April of 2018.  The film has spread across America and in other countries. Since then Power In My Hands has been making a powerful impact on all those who have the opportunity to see it.

After receiving the award, Mr. Boldin shared “Working on this film project has truly helped us to encounter Christ deeper and to a greater sense that there is hope amidst the spiritual crisis of this age. This has brought us to an ever greater realization of the need to bring Christ to others in this age when there are little signs of hope, mercy, compassion, and love for the dignity of the human person.  Individuals and families, regardless of their station in life have a spiritual hunger which needs to be filled with the love of Christ through Our Lady. We need to bring hope to others and that is the core message for the film Power In My Hands.”